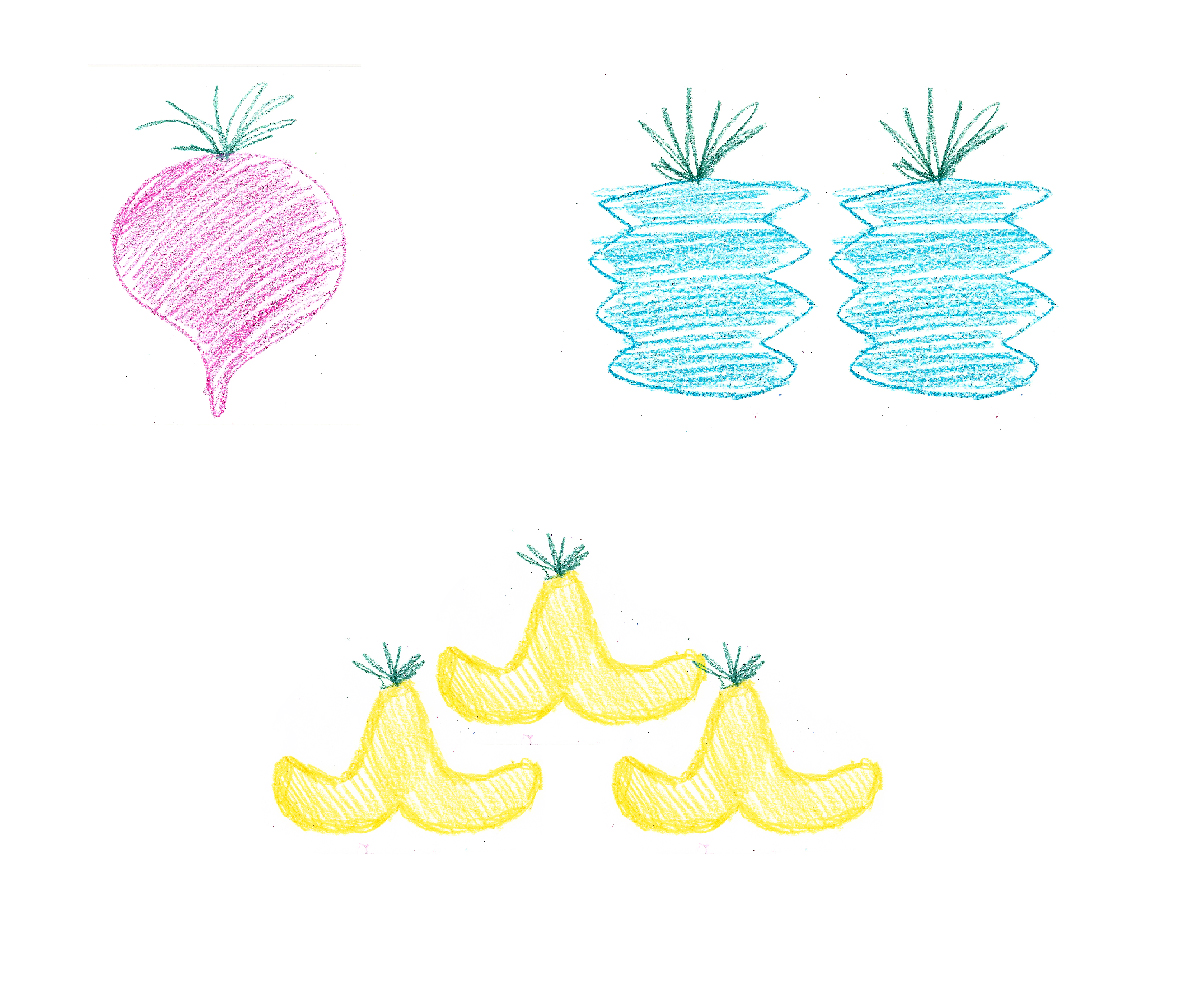 A physical game about language generation made for Global Game Jam 2019 with Tyler Rhodes, Kirk Musngi, and Jeffery Stager.

With Fruit Words you can create a 'home' language and mother tongue that can then change and alter over time depending on its interpretation and who's speaking or writing it.
It begins with a minimum of 3 drawings, with each drawing denoting 3 kinds of variables. In our case it will be 3 fruit, with Shape, Color, and Number being the variables. 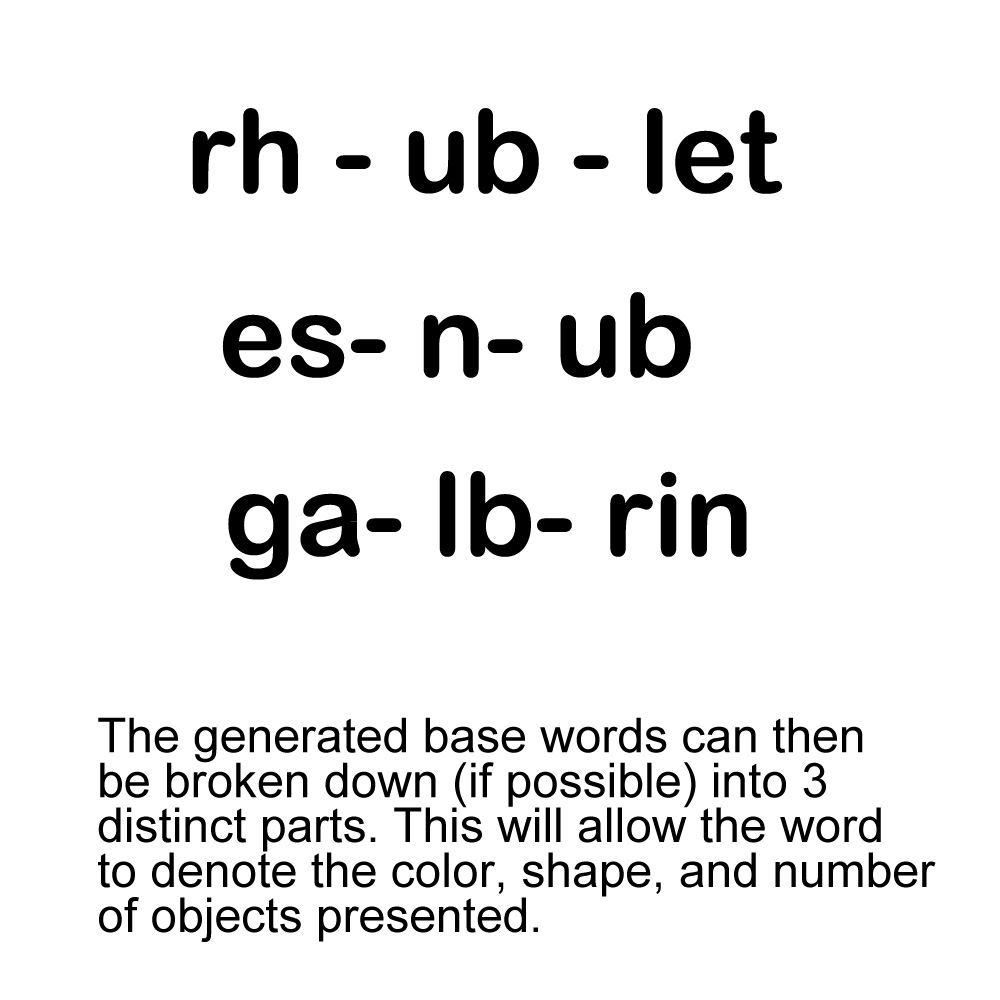 From these words you can then generate 27 total for each variation of the initial presenting cases by splitting the words into 3 distinct parts. The first part, in our case, will denote shape, the second part of the word, color, and the third, number of objects. By having new images with the remaining objects in configurations of one, two or three, the only part of the word that changes is the ending, as the color and shapes haven't changed. 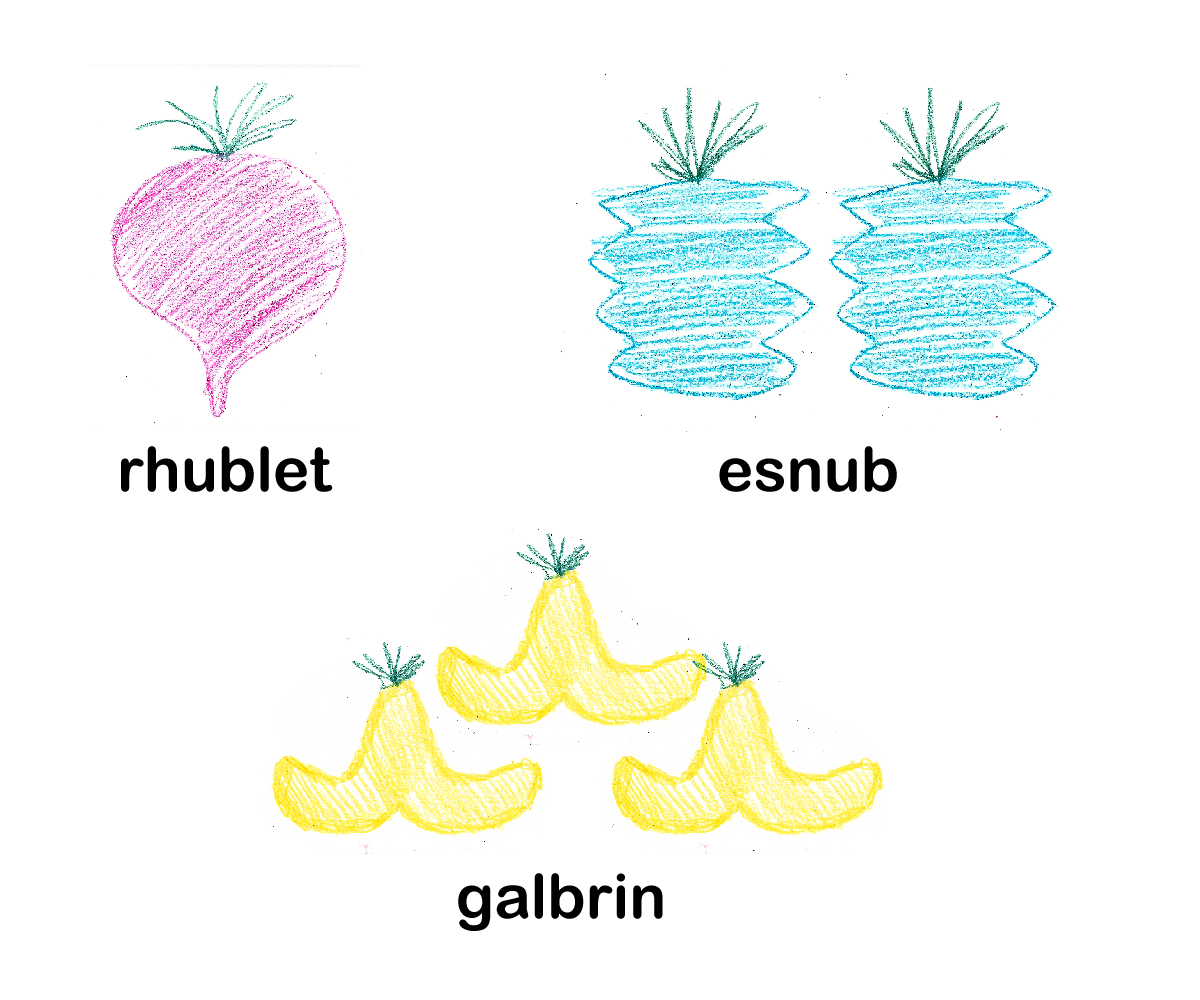 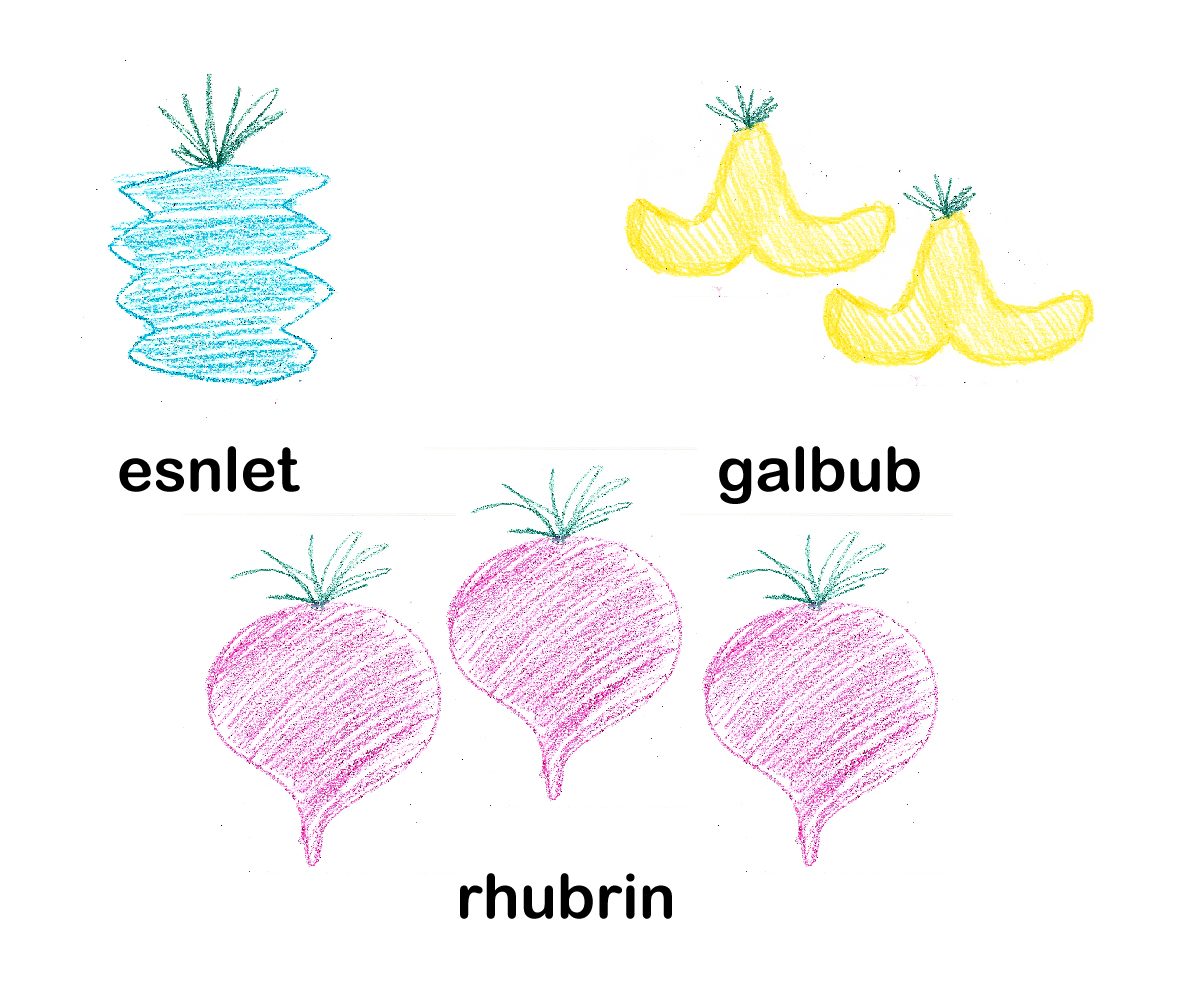 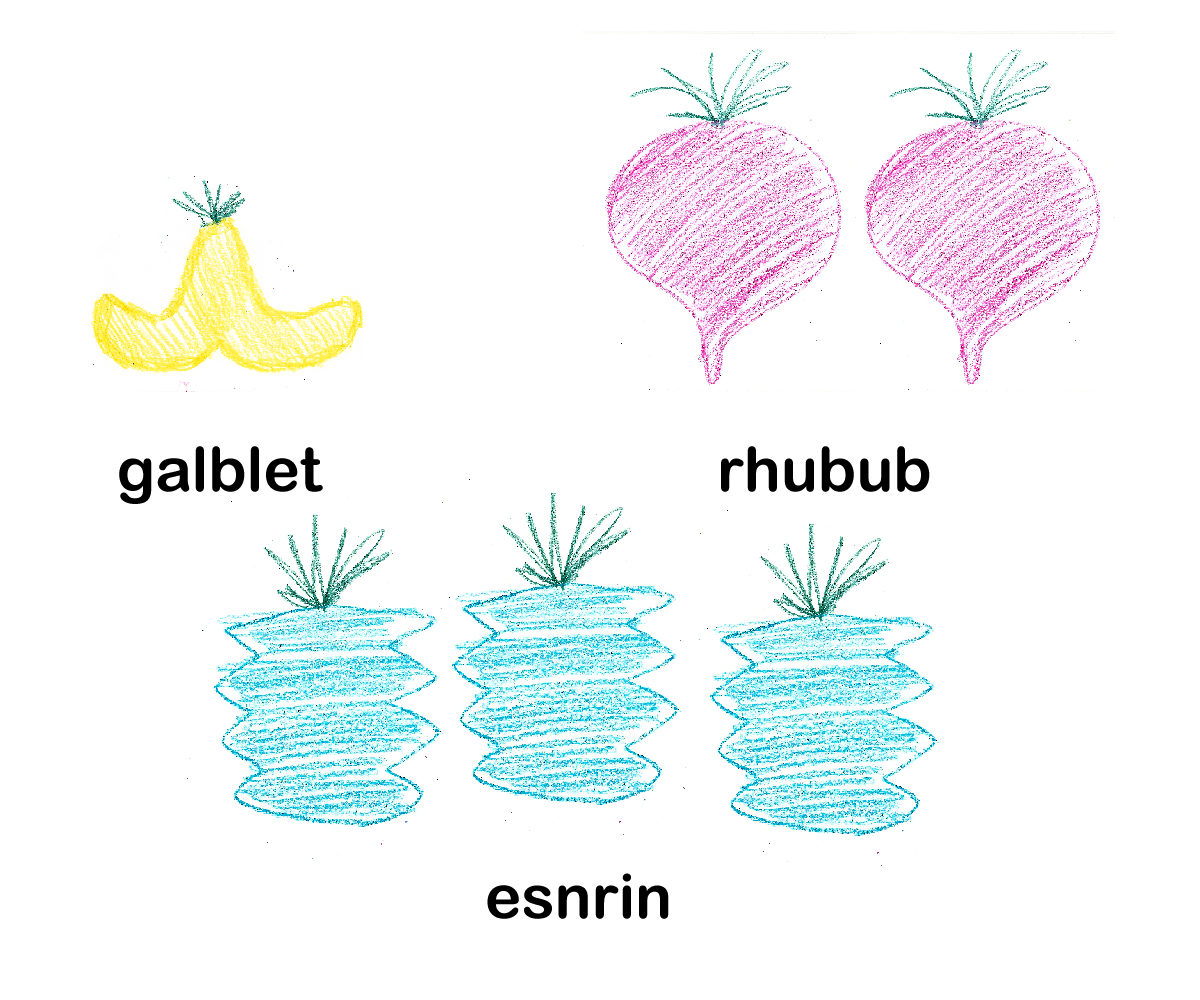 We can then present another image that hasn't been shown at all, and come up with yet another word from the base set to describe this scenario (in our case, a spiny, red fruit in a group of 3, or a es(spiny) ub(red) rin(three).) 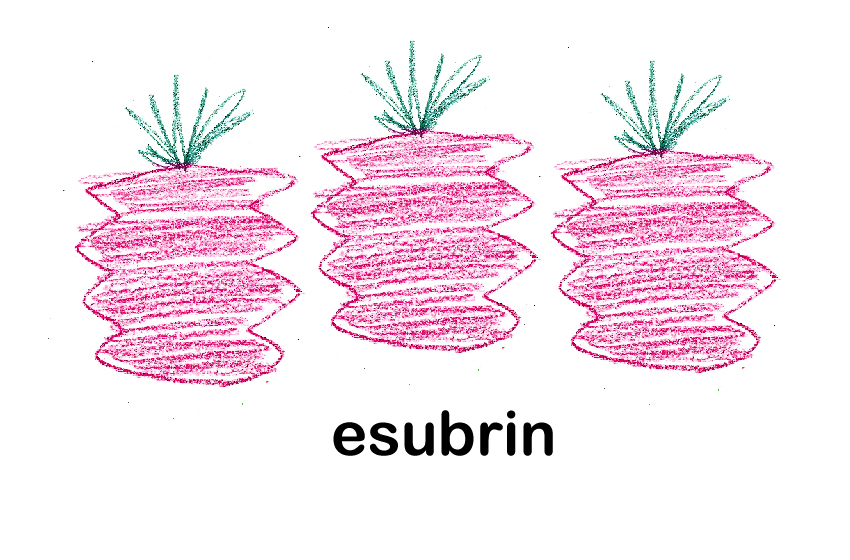 You can also come up with new compound words by showing novel objects that could fit the parameters of the language but not the formal rules, such as a series of 3 spiny fruits that are somewhat blue, but also somewhat red, and combining the sounds for each into a new word (esnubrin). 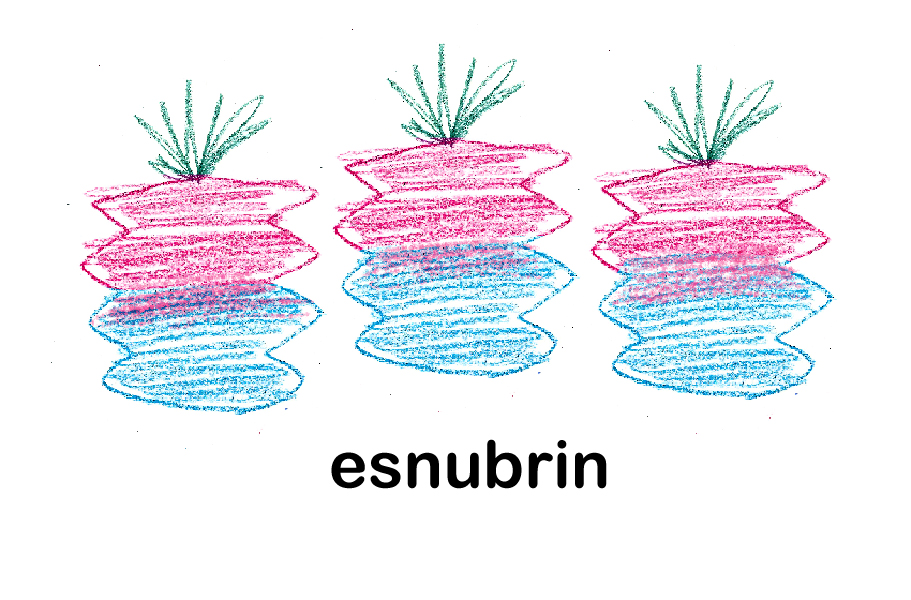 In this way you can test peoples understanding as a kind of puzzle.

Another activity is to only show the initial 3 images with words and show them to a large grouping. The group would then be shown a new word generated from the initial 3, or another fruit pairing, and asked to name or draw what they think the fruit is. Because they have imperfect and incomplete information on how the language is structured in its meaning, some people will read the logic of the language as I mentioned before (shape, color, number), but others may read shape, number color, or color, number, shape etc.
You could then either see peoples written answer to the earlier question or see the drawing of what they think the word describes, and get a good sense of how they're understanding the structure of the invented language. There would be 6 different variations possible, but you could start be seeing who read an image have a shape component first. You could then split them off from the other groups. Then, within that group, you could see who understood the language as shape, color, number or shape, number, color, and split them again. With everyone split into subgroups you could then quiz them to come up with a novel or compound word to describe a new situation or object, and because of the specific rules (as understood by that subgroup), their language would make sense to them, not be slightly misunderstood to the people beside them, and misunderstood even more by the people farthest from them. In this way, the original homeland mother-tongue could be slowly changed with novel words into their own languages that may share common roots and letters with each other, but have different meaning and understanding among the groups.

This scientific study by Simon Kirby, Hannah Cornish, and Kenny Smith titled "Cumulative cultural evolution in the laboratory:An experimental approach to the origins of structure in human language" was very similar to my initial idea and was helpful in developing some of the basic mechanics. You can read a PDF of it here, and hopefully understand what I was trying to do with the project a little more. 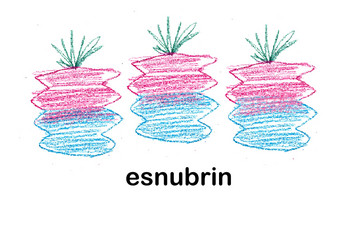